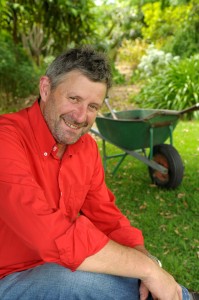 Stephen started working in his father’s nursery at the age of 10 and at the same time joined the Mt   Macedon Horticultural Society. By the age of 19 he was the president and still is to this day.

After completing a Gardening and Turf Management apprenticeship, and achieving an Award of Merit as the top apprentice in his trade he subsequently awarded 2 scholarships, one to the United Kingdom and the other to New Zealand.

On Stephen’s return to Australia he ran the family nursery until he started his own nationally recognised nursery, Dicksonia Rare Plants, in 1980 and has been a passionate plant collector ever since.   Starting with writing articles for magazines and newpapers his media presence has developed to the    stage where he does a regular radio slot on Melbourne’s 3CR. In 2002 Stephen was awarded a Radio Laurel by the Horticultural Media Association for his segments on ABC radio 774. Stephen has appeared on a variety of television programmes, however Stephen is best known for his role as host on ABC television’s Gardening Australia which he did for 3 years.

Stephen lectures and holds seminars both in Australia and overseas.

As a plant hunter and traveller he has been to many parts of the world including Namibia, India, Pacific North-west of the USA, England, Ireland, South Africa, Peru, New Guinea and France as well as the afore mentioned  Argentina. He has also led tours to Madagascar, Reunion, Mauritius and North-west France.

He has published three books on rare plants that have received rave reviews and his manual contains over 2000 entries of rare plants available in temperate Australia. He also contributed to the two large tomes produced in Australia Botanica and more recently Flora.

Stephen’s garden and nursery hold three national collections for the Garden Conservation Association of Australia. They are Cornus, Sambucus and Acanthus.

In 2001 the Royal Horticultural Society of Victoria recognised Stephen with a John Pascoe Fawkner Gold Medal for Distinguished Service to Horticulture.

Stephen Ryan is available for lectures, to  write articles, radio and TV appearances etc. for information contact me.

Guided tours of Tugurium Gardens, for three years the set for Gardening Australia, also available by appointment for groups.

There are no upcoming events.